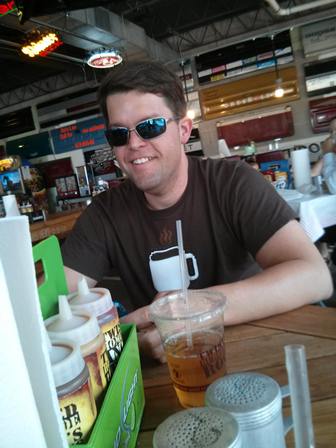 So you want to know more about me, eh? Quick story...I started messing with my Canadian friend on the whole "eh?" thing, and it kinda stuck with me...so jokes on me, eh Mike? :P

Anyway...a little history. I started life with computers at an early age. I know you may be saying, "But I thought this was a blog about scuba diving!" Well, yes, that's true, but unfortunately dive instruction doesn't pay all that much, and I.T. work does, so we're going to cover that history. My dad (hey dad!) used to work for an old phone manufacturing company working on the PCBs n such, so we got a family computer pretty early. I remember telling my friends how much faster notepad opened when I double-clicked on it each time we added a number in front of the 86. :P Some of you will be too young to understand what that means (Xane and Lillie)...but it's funny. Another bit of fun with my computer history is me being the first person I knew to build a serial-cable network between my Apple 6200PPC and my dad's 586 to play Warcraft 2 multi-player! Now that's a good time! I still remember clicking on my orcs to make them say the "quit-bothering-me" sound bites. :P And picking white or black so it looked like they were running around in suits.

When I got to High School, I was usually my teachers' first go-to for fixing their computers. This got around the school to the point where I had teachers pulling me out of one class to fix the computer in another class. I kept that on my resume until just recently. :D That actually got me a passing grade through band my senior year after my saxophone got stolen the second time. I did do a short stint at North Lake Community College and got my CCNA for networking...but apparently you have to renew it every year, so that's gone and expired...but I still have a pretty good idea on how to configure routers, and I'm a pretty big deal when it comes to setting up small business networks.

After High School and North Lake, I hung out for a few years working for Intuit making one mistake I won't make again. Don't get me wrong, Intuit is truly a great place to work (as funny as that is to my other Intuitans). Basically, I continued to pick up things to do and move what I was doing in my job, without demanding a new title. This came to bite me in the arse 8yrs in when the economy took a dump and they pulled me back to my original job of phone-jockey. As you can image, this didn't set very well with me, so I started school for Sound Engineering which I had been interested in/doing since Theater in High School. Three out of four semesters into school, my manager at Intuit decided to go back on an agreement we had made to allow me to leave once a week for school, so I had to leave Intuit...it just wasn't going anywhere good.

I went to school for Sound Engineering at Mediatech Institute for Sound Engineering. Their sales-pitch is probably all that keeps them afloat. The teachers are great, but the management and office is running a used car sales lot for people with shitty credit. Once you sign on, even if you don't finish, you still pay the full tuition; And you have to complete the entire program to get any papers. I wasn't a big fan once I finished it all because I'm not an artistically creative person...I'm a technically creative person. So when I had to take Producing 101, it wasn't pretty. I did play the Saxophone in High School so I know how to read music, but I have no clue how to write it from scratch. I basically worked my way through that class on favors and brownie points. :P Learned some things about how music can control people...but still can't write for shite.

During school and after Intuit, I used my experience at Intuit to be fought over by the managers at all of the Geek Squads in Collin County. It was quite funny. I walked in to the Frisco store and spoke with Kraig and showed him my resume, so he asked me to submit it all online so he could get me processed through the system. A day after I submitted it all I had Plano, McKinney, The Colony, and 2 Dallas stores all calling me trying to get me to come in...even making offers without talking to me; I felt loved. :P For some reason (I think I know why) at Best Buy, I really started to develop my own personality. I think at Intuit I was the young'n, so I always felt inferior to the people there even though they praised me. At Best Buy, I earned my own again, but with people closer to my age; that, and I started to care less about what people thought about me and came out pretty early there and was accepted anyway. This made me feel more like a person and allowed me to explore more of myself. :) Thanks Eliza, Raf, Kraig, David, and Matt!

While at Best Buy and after I graduated Sound Engineering school, I was applying for every Cruise Line I could think of as Sound Engineer. It took a while, and a favor I'm sure, but I received an offer to work for Royal Caribbean aboard the Freedom of the Seas on April 18th, 2010....I'll never forget that date. Getting that call from my recruiter that I needed to be in Orlando in 2 weeks :P I was on what they call, "Cloud Nine". :D I had an old blog on that life experience too. Life on-board a cruise ship is definitely something every conservative person should experience...it will REALLY open you up to live and work with people from all over the world in the same situation as you. Even if it is being stuck on a cruise ship for up to 10 months at a time.